In the morning of May 5th, 1969, Toronto police detectives Kevin Boyd and James Sugden were investigating a break-in at the Odeo-Hyland Theatre on 1501 Yonge St. when they spotted the Oldsmobile carrying Ângelo Nóbrega and his two brothers, John and José. Riding in plainclothes in an unmarked vehicle, the detectives ordered the brothers to stop, but they drove away. After a brief chase, the detectives found the suspects parked at a gas station near Yonge St. and Albertus Ave. Once spotted, the youngest brother tried to flee on foot but was quickly grabbed by detective Sugden. In detective Boyd’s account, Ângelo, who was in drivers’ seat, got out of the vehicle and began fighting with him. This allegedly caused Boyd to lose his balance and accidentally fire his revolver, hitting Ângelo in the head. Later the Toronto Police added that the detective drew his weapon because Ângelo made a “suspicious move” as he stepped out of the car. The brothers’ version of the events was different. According to them, they did not stop their vehicle as instructed because they did not know who was chasing them, given that the police officers had no visible identification. According to José – Ângelo’s twin brother – the three young Madeiran immigrants stood against the wall as the detective instructed: “Angelo was just standing there with his hands in his lapels like he always does… I watched to see what they would do and all of a sudden there was a shot.” John said to have seen detective Boyd draw his weapon and thumb back the hammer: “It was no accident.”

This episode was reported in the press and upset the young Portuguese community in Toronto, whose leaders mobilized in solidarity with the parents of the victim. According to the Toronto Daily Star, over 300 Portuguese and at least two police officers participated in the funerary mass in honour of Ângelo Nóbrega. The previous night, about seventy-five community members, led José Rafael – a travel agent, radio announcer and immigration consultant – met at Our Lady of Mount Carmel Catholic Church’s Portuguese Community Center. At this meeting, Rafael asked the audience: “Those policemen didn’t have any business sticking their noses into that car. If that had been a Cadillac, what do you think?” To which one person responded: “Ha! The cops wouldn’t even look at them… Rich guys drive Cadillacs. Police don’t bother rich guys.” The attendants decided to start a petition to be sent to Prime Minister Pierre Trudeau and the opposition party leaders, demanding the police treat immigrants better. The Italian-Canadian Liberal MP for Dovercourt Dante DeMonte, along with other high profile Canadians, send their support to the Portuguese community in its quest for justice.

A committee formed at the meeting at Our Lady Mount Carmel called a press conference in the Clube da Nazaré that drew two MPPs, including then leader of the Ontario New Democratic Party Donald McDonald. In this conference, José Rafael announced that a silent march from Queen’s Park to City Hall was to be held on May 17. To advertise this protest, the committee distributed “thousands” of pamphlets, including to forty-two ethnic newspapers in Toronto. The organizers tried to rally all Torontonians and not just the Portuguese as they considered the issue to be part of a larger problem of police discrimination and lack of communication with the city’s immigrants. About 500 people participated in the protest march despite the rain; only a tenth of the organizers’ predicted turnout. Leading the group were fifteen children holding a black banner with the inscription: “Justice Ignored! Protesting Violence.” At the start of the march, Rafael asked the participants to: “Walk silently and in perfect order. It is only in this way we can protest the violence of the police. The only way we can show we do not need weapons pointed at us. We can obey and will obey.”

Not all community leaders agreed with this march, especially among the conservative majority, including the influential priest Alberto Cunha of St. Mary’s Catholic Church who considered it too “premature and emotional.” In his view, the community should have waited for the results of the inquiry that was soon to begin. Arguably, a bigger reason why the community’s conservative wing hesitated to throw their support behind this march was the fact that some of the organizers belonged to the left-wing Portuguese Canadian Democratic Association. This organization was constituted by “anti-fascist” exiles from Portugal who opposed the Estado Novo dictatorship of António Salazar and Marcello Caetano, including members of the clandestine Portuguese Communist Party. One of them was, Domingos da Costa Gomes, a lawyer of political prisoners in Portugal exiled in Canada since 1966 and a known communist.

The controversial inquiry on the Ângelo Nóbrega’s death, which concluded in June, found detective Boyd innocent of any wrongdoing. However, the coroner who worked on the case was suspended by the attorney general and placed under investigation for potential irregularities throughout the inquiry. The final decision disappointed the Portuguese community, which further motivated some of its leaders to come together and create the Portuguese Canadian Congress, the first umbrella organization meant as a spokesperson for this ethnic group on political matters. Gomes was nominated its first president, which displeased the conservatives, who quickly distanced from the Congress despite having contributed to its creation. Intense political battles between these self-appointed community leaders would lead to the disintegration of this organization in the mid-1970s. Since then, there were other attempts at creating an ethnic umbrella organization that could represent the political interest of the Portuguese in Canada, which was finally achieved in 1993 with the creation of the Portuguese Canadian National Congress, now virtually defunct. 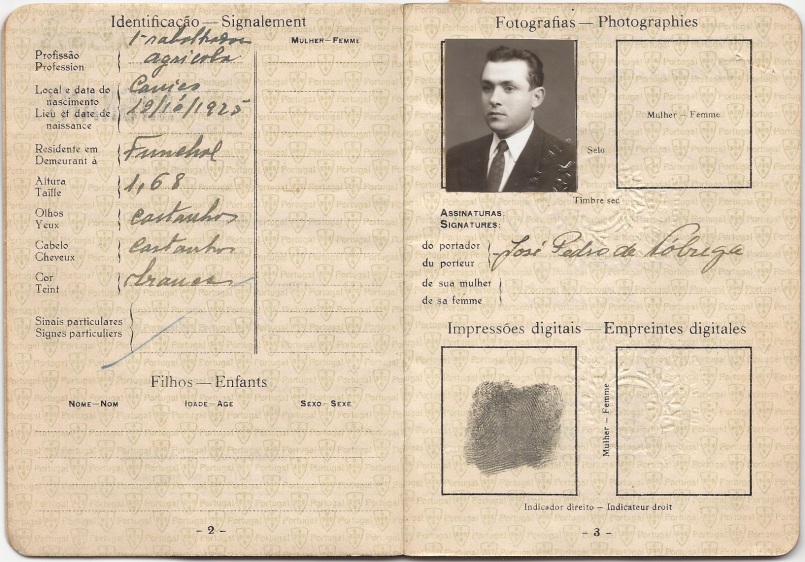 Portuguese passport used by José Nóbrega (Ângelo’s father) to enter Canada in 1953. Courtesy of Gallery of the Portuguese Pioneers. 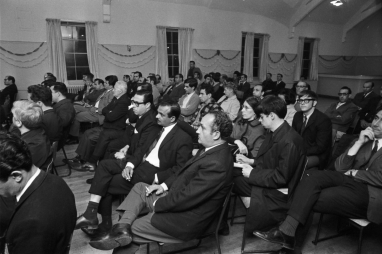 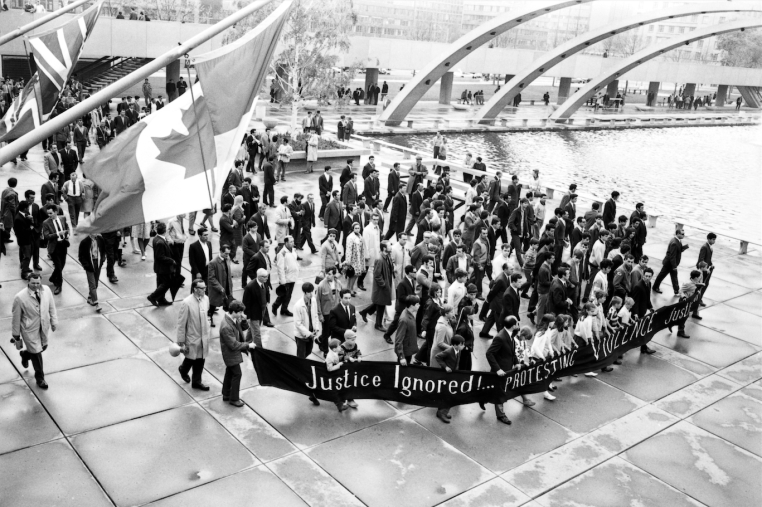