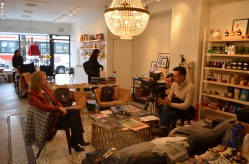 Starting in November 2015, we have partnered with Pedro Rodrigues of RoughCut Audiovisual to produce content for the daily show “Hora dos Portugueses,” on Portugal’s international public TV and radio broadcaster RTPi/RDP. Our team has since grown with the addition of Luis Moreira (cameraman) and Daniela Costa (reporter) in Toronto, and Marta Raposo (reporter) in Montreal. The show is dedicated to showcasing the Portuguese diaspora around the world. Our segments usually mix historic with contemporary aspects of Portuguese-Canadian culture, focusing primarily (though not exclusively) on Canadian-born or -raised individuals who are doing interesting work at the heart or in the fringes of the Portuguese and Canadian communities. Among them are Jerry Dias (Unifor), Paulino Nunes, Melissa Grelo (CTV), Sid Seixeiro (Sportsnet), Meaghan Benfeito, Mike Rita, Anthony de Sa, George Pimentel, Sandy Miranda (Fucked Up), Matthew Tavares (BadBadNotGood), Lucas Silveira (The Cliks), Alexandre Amâncio (Ubisoft/ Lune Rouge), Dale Brazão (Toronto Star), Ana Paula Lopes, Nuno Cristo, Manuela Marujo (University of Toronto), Maria João Dodman (York University) and many more. For a complete listing of all the segments we have produced thus far, follow this link. 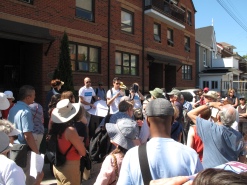 Portuguese Toronto: Early Decades – In 2014, coinciding with the Portugal Day celebrations in June and the Dundas West Fest, we offered for the first time the walking tour Portuguese Toronto, included in that years’s Heritage Toronto tour program. The guided tour takes people through Toronto’s historical Portuguese neighbourhoods, starting in Kensington Market and heading west on Dundas St. West until Trinity-Bellwoods Park. After the first two years

with Heritage Toronto, we became part of Jane’s Walk program in 2016 – here is our listing. That year, our tour became formally associated with the Dundas West Fest and was listed by NOW Magazine as one of the 15 most exciting Jane’s Walks.

2016 was also the year that we launched our digital walking tour with the free mobile application izi.TRAVEL, which uses GPS technology to offer users geotagged site-specific audio recordings and images accessible through their mobile devices. A desktop version is also available here.

The Portuguese in Toronto: 1953-2013 – On the occasion of the 60th anniversary of Portuguese mass migration to Canada, celebrated on May 13, 2013, the Consul-General of Portugal in Toronto, Júlio Vilela, invited the Portuguese Canadian History Project to curate an exhibition to be included in the 2013 Scotiabank Contact Photography Festival. The Secretary-General of Portuguese Communities and the Instituto Camões provided funding to produce the materials, which consisted of twenty historical photos, two stand-up banners with text and illustrations, and catalogues with extensive captions. Other community businesses and organizations provided in-kind support, including photos from their collections. The launch was held on May 13, 2013, at Toronto’s City Hall and attended by close to 150 people. The event attracted the attention of various community and mainstream Canadian media, including Matt Galloway’s Metro Morning show on CBC Radio. Over that week, visitors picked up most of the 850 catalogues and 1,000 postcards available for free.

Designed to be a traveling exhibition, it has been shown at various locations and events, including the Consulate-General of Portugal in Toronto (2013); Dundas West Fest (2013-2016); Toronto Catholic High School Archbishop Romero (2013); Azorean House of Ontario (2013); Lillian H. Smith Toronto Public Library branch (2014); IC Savings, Dundas St. West branch (2014); Scott Library, York University (2014); Victoria College, University of Toronto (2014); and Museum Strathroy-Caradoc (2015). For the latter, we partnered with the Gallery of the Portuguese Pioneers (GPP), the musician Nuno Cristo and the author Anthony de Sa in what became a Portuguese-Canadian history roadshow. Since 2015, this exhibition has been on permanent display at the GPP, whenever not traveling.

A digital companion for this exhibition, with audio recordings, immersive soundscapes and additional photos, designed for mobile devices, is available through the free mobile application izi.TRAVEL. A desktop version is also available here. There is also a digital interactive map (currently in production) where people can see where the photos were taken and how they relate with each other geographically. Both digital features were unveiled on June 11, 2016, during the Dundas West Fest, at the IC Savings branch.

The PCHP | PHLP’s directors have been invited numerous times to deliver public lectures on the history of Portuguese immigration in Toronto and Canada. We have had the pleasure of sharing our research with high school and university students, faculty members, seniors, library patrons, and historical society members. These public lectures attract people of all backgrounds with an interest in a variety of historical topics. You can hear a podcast on ActiveHistory.ca of one such talk by Susana Miranda, titled: “Keeping the City Clean: Portuguese Women in Toronto’s Cleaning Industry, 1970-1990.” For inquiries about our public lectures’ topics and availability see our contact info below.